To get to Rohwer, you drive through the countryside north of McGehee for about 12 miles .  As you come upon the hamlet of Rohwer, you’ll drive alongside a levee and a dense row of trees on the left hand side of the road, and soon you’ll see a small sign indicating the Rohwer Camp cemetery.

Crossing over the levee (which is an old railroad bed), the first thing you notice is water on the left.

Being a West Coast guy, I immediately look for alligators.

Then, you look straight ahead and see this… 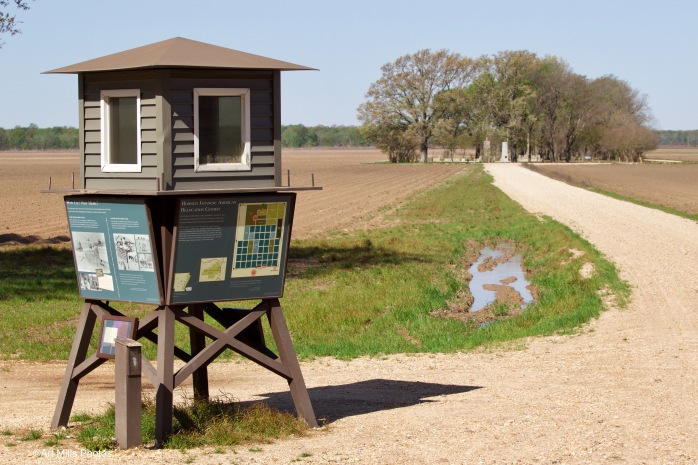 The visitors kiosk explains the basic Camp layout and points the way ahead to the cemetery.

It’s a cold morning, but I set out walking toward the cemetery. 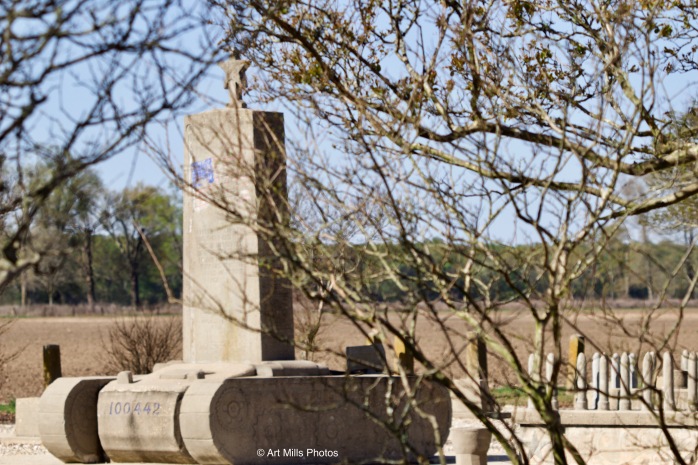 This is a monument to the 442nd Regimental Combat Team, an all Japanese American unit in the 5th Army.

This second monument was built later.

Sam Yada, originally imprisoned in Rohwer, remained to live the rest of his life as a farmer in the area.  Sam worked effectively with local people and various government and academic entities to preserve the cemetery.

The portion of the cemetery in the photo below includes those who died  during their imprisonment in the Rohwer Camp. 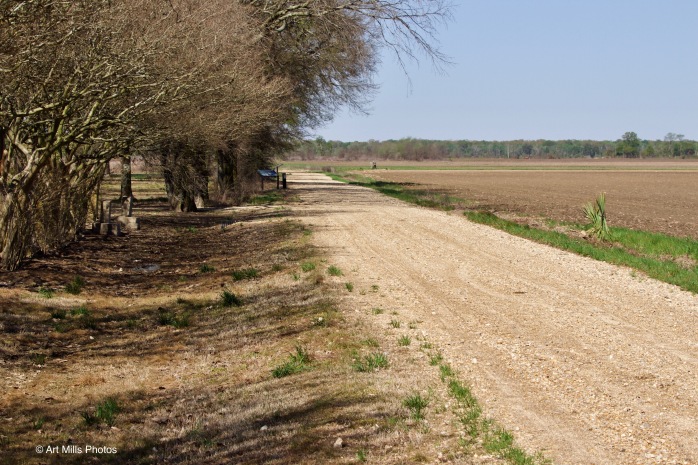 Continuing to walk alongside the cemetery, I look toward the back end of the Camp’s residential area. 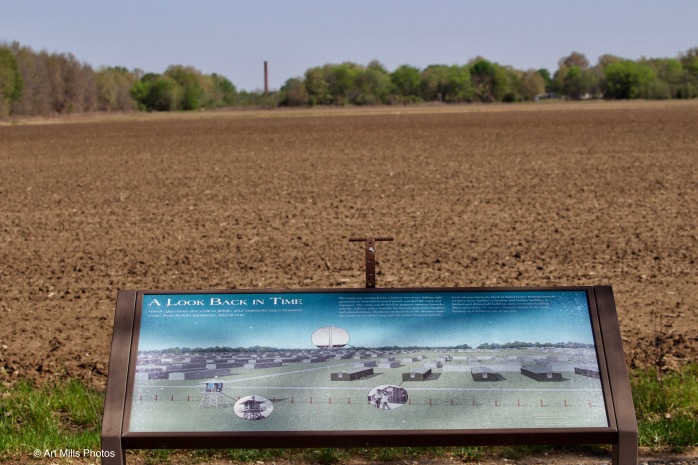 About halfway from the Kiosk at the front of the Camp, I come upon this interpretive board.  In the background is the towering smoke stack from the old hospital.

A telephoto shot of the smoke stack from the same spot.

Turning back toward the kiosk, you can see the front end of the Camp’s residential area.

Back my starting point at the kiosk, I turn to take a picture of the Northern side of the Camp.  The Camp’s residential area extended just beyond the treeline.

Standing at the same spot, I turn West, capturing the size of the Camps’ 400 acre residential area. Throughout the Rohwer Camp site, the soil is rich.  Even though the surrounding land was drained for the Camp, and drained by farming operations after the camp, there is a lot of water on the ground. It explains why the land was available for a Camp in the first place.  It also makes me appreciate how much work the Japanese Americans did to make the Camp livable and the land farm-able.

Finally, I was fortunate to spend a portion of the morning with a mother and daughter from the area.  A mutual friend introduced us. They graciously walked the site with me, showed me the surrounding area, and explained how the preservation efforts had happened.  I deeply appreciate their hospitality.

Next, we’ll visit the Rohwer of yesterday.  We’ll take a look at some of the historical photos that capture what it was like.

Thanks for sticking with me on the journey.

← The Museum at McGehee: a little jewel box.
Rohwer Camp, As It Was →