As if the lack of privacy in the barracks was not enough, the bathroom and shower facilities were housed in military-style latrine buildings. The one shown here is a reconstruction of a Women’s Latrine (there was one for women and one for men in each block of fourteen barracks). In a Manzanar latrine, there were toilets and a communal sink, an open changing area, and showers. There were no partitions and there was no privacy whatsoever. On an average day, 150 people used each latrine.

“One of the hardest things to endure was the communal latrines, with no partitions; and showers with no stalls.”

The photos below show the stark facilities as they were inside the Latrine. 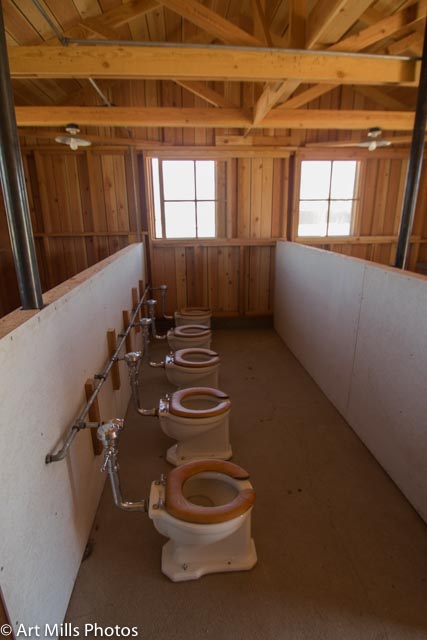 Here was the first row of toilets…

This was the view into the shower room…

This was the view out of the shower room…

The people who were taken to Manzanar employed many strategies for finding some measure of privacy, including going to the toilet and the shower late at night, or to a latrine that was less frequently used than others.

“Children are amazingly adaptable. What would be grotesquely abnormal became my normality in the prisoner of war camps. It became routine for me to line up three times a day to eat lousy food in a noisy mess hall. It became normal for me to go with my father to bathe in a mass shower.”

In many ways, this story about the latrines is the most shocking of all about the  WRA Camps. There is a dehumanizing quality to the latrines, almost as though there was an effort to treat people with greater disrespect than did the incarceration itself. This was done by our government in the name of national security. Done to our fellow Americans.

It felt like an invasion of privacy to take these photos. Still, I think it was necessary to do so…to witness to the scale of the injustice done with the WRA Camps.

As I continue this part of my journey, walking through Manzanar, come along with me.  I hope my photos and reflections, and especially the commentary of people who lived there, will bring Manzanar to life for you.

← LIVING IN BARRACKS
No Meals at Home →

2 Comments on “The Women’s Latrine”