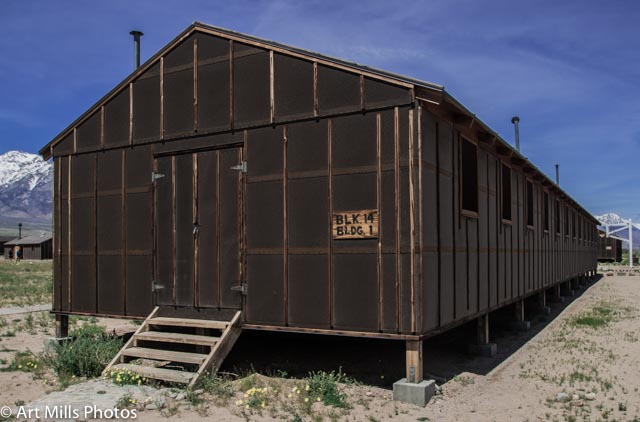 Have you ever lived in military barracks?  The worst military barracks of our era (constructed shortly after World War II and used at least through the Vietnam War) were far better than the barracks at Manzanar. For one thing, the military barracks were solidly built, and held out the wind, rain, fog, and dust. They generally had linoleum or tile over a wood or concrete base. It was possible (and required) to mop and wax them regularly to keep them shining. Dust particles were not allowed to accumulate. There was ample light and heat. Finally, there were only soldiers, sailors, or marines in those military barracks.

Here are some facts about people who lived in barracks at Manzanar.

The people who were taken to Manzanar were in for a shock about the sorry state of their living quarters. For starters, only some of the barracks were completed when people began arriving. The rest had to be built in haste.  In the hurried process, green lumber was used. That green lumber was sure to dry up quickly in the harsh Owens Valley climate, and thereby create gaps in the roofs, the walls, and the flooring.

The problem with the green lumber wouldn’t have been as bad, if the barracks had been designed and built properly. However, the exterior, wood frame walls consisted of pine boards covered with tarpaper (with thin wood slats to hold that in place). There was no proper exterior siding over the tarpaper. There was neither insulation nor interior covering of the walls, the roof, or the floor… just bare wood. Everything leaked. The worst by far were the floors.  There were gaps in the wood planks and there were knot holes. When the wind blew, dust and sand poured into the buildings. The carpenters did the best they could under impossible circumstances, but it wasn’t enough to result in adequately constructed housing, even for barracks (which are by definition Spartan).

This picture of the barracks under construction shows how bare bones and flimsy they really were.  Still, the physical inadequacy was just the beginning.

The fundamental problem with the barracks was that they were barracks.  Barracks are designed for armies not for families. Each barrack was 20 feet wide and 100 feet long. There were four “apartments,” using the term loosely. Each “apartment” was equipped with a single bare light bulb, a small oil heater, and not much more. There were steel army cots. Upon arriving in Manzanar, each person was given a cloth sack to fill with straw for a mattress. There was no other furniture and there were no partitions. In most cases, eight people were crammed into a 20’x 25′ “apartment.” It would have been bad enough if they had all been members of the same family.  But, often there were two families in one “apartment,” or there were unrelated couples in the same “apartment” with a family. Sometimes those couples were newlyweds. What a honeymoon.

“Not only did we stop eating at home, there was no longer a home to eat in. The cubicles we had were too small for anything you might call ‘living.’ Mama couldn’t cook meals there.  It was impossible to find any privacy there. We slept there and spent most of our waking hours elsewhere.”

Jeanne Wakatsuki Houston, Child at Manzanar, from “Farewell to Manzanar”

The next two photos are of the barracks reconstructed by the National Park Service.

If you look closely, you can see that the exterior wall “siding” consisted of either 1″x 6″ or 1″x 8″ pine boards. Same for the floor boards.  As the green wood dried and shrank, it was also subject to warping and cracking.  The exterior doors at the end of the building were constructed of the same pine boards (they admit light, and therefore dust).

“I remember waking up in the morning and being covered in sand. Whenever the wind blew, the sand would come in through the floor.”

Some folks were handy and fashioned small pieces of furniture. Below, you see a replica of a baby crib that was built by a resident. 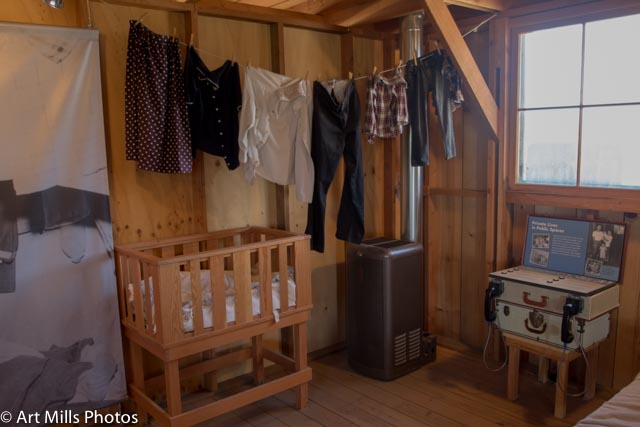 You can also see one of the small oil heaters found in each “apartment.” (Note: the suitcase-like device on the right is part of the NPS interactive display).

For some, the “apartments” eventually evolved, with resident-installed modifications that included sheetrock on the interior walls and linoleum on the floors. However, for many with sparse resources the “apartments” remained the same for three years.

Here’s a picture of a gentleman lying on his cot.

“The room was small and there was no furniture (other than cots). We made a table and bench from scrap wood. We made quilts or rugs out of discarded clothing. Nothing was wasted.” (Then, responding to a question about changing over time)…“The apartment stayed the same the whole time we were there.”

As I continue this part of my journey, walking through Manzanar, come along with me.  I hope my photos and reflections, and especially the commentary of people who lived there, will bring Manzanar to life for you.

← It was a prison camp…
The Women’s Latrine →

2 Comments on “LIVING IN BARRACKS”