It is an in between time for me right now.  I’m in between visiting the Tulelake Camp in Northern California and visiting Poston on the Colorado River in Arizona.

But, I’m also between looking at this specific thing, this WW II internment, and considering it in the broader context of race relations in America.  So many people say there is no such connection, but it is unmistakable.  There is a particular image that captures the connection.  It is the California Historic Marker that was placed in front of the Tulelake Camp on May 27, 1979 (the name of the Camp is misspelled on the marker). 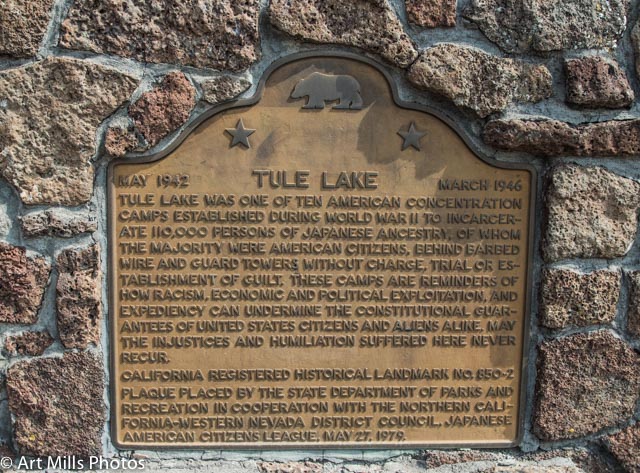 “These camps are reminders of how racism, economic and political exploitation, and expediency can undermine the Constitutional guarantees of United States citizens and aliens alike.”

It draws me to a quote by one of my favorite contemporary American Philosophers… Mr. Wendell Berry, farmer, poet, and philosopher. Mr. Berry wrote this many years ago:

“I do not know how exact a case might be made, but it seems to me that there is an historical parallel, in white American history, between the treatment of the land and the treatment of women.  The frontier, for instance, was notoriously exploitative of both, and I believe for largely the same reasons.  Many of the early farmers seem to have worn out farms and wives with equal regardlessness, interested in both mainly for what they would produce…”

I believe there is a similar parallel involving the treatment of virtually all people of color who have come to America (or were here in the first place) as well as people who live in poverty or on the very edge of it.

As women march and inspire others to join them in marching, I hope that we will remember the connection between this movement today, this tidal wave, and the sacrifices of all those who have gone before. Walking together builds solidarity and makes a point for all to see and hear.  So too does being mindful of historical solidarity with all who have marched before, with all who have navigated the seemingly endless path of contradiction between American political philosophy and the reality of American history.

This day, my heart is full of thanks and blessing for all those who have walked and struggled.

Soon, I’ll be back on the path of my journey to the Camps.  I’m going next to Poston, Arizona and then to Arkansas to see the Rohwer and Jerome Camps and to visit the Japanese American Internment History Museum in McGhee, Arkansas on the occasion of its fifth anniversary.  I promise to share many photos and perspectives.  I hope you’ll stay with me for the rest of the journey.  It is a path better traveled together.