Posted on September 7, 2017 by revarttrek

Tule Lake was overcrowded from the start.  It also suffered from federal government mismanagement for the duration.  This sorry combination was one of the factors that led to major problems at Tule Lake, to its becoming the maximum security prison camp of the WRA Camp system, and to its being such a complex place to understand.

The National Park Service (NPS) has recreated barracks rooms, using an old barracks building which they reclaimed from a land owner in the area.  It is on the site of the present NPS Tule Lake Unit, a site shared with the World War II Valor Museum on the Modoc County Fairgrounds.

To get an idea of what I mean by overcrowded, take a look at this image of the inside of a barracks “apartment.” 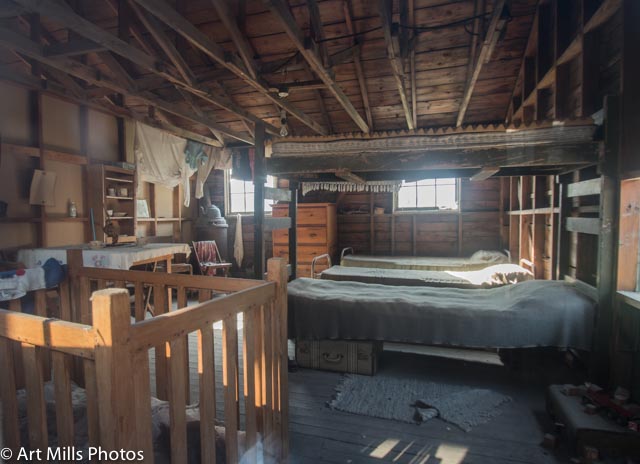 This small, open room was designed for a family of four who used the room as “home.”  It was 16 feet x 20 feet. Notice the wall on the left hand side…in theory, it provided privacy.  But, note that the wall only went to the rafter line.  Above that, was open space (it was that way for all of the interior walls in the 100 foot long barracks). There was no privacy.

It is difficult to imagine a family living here. It is not a home in any real sense.  The families must have been deeply shocked to be shoe horned into one room. A family of four was squeezed into a one room “apartment” that had 320 square feet (s.f.).  In 1942 California, a modest sized house for a family of four would have been 1000 to 1200 s.f.

Let’s put this in a WRA context. All the WRA Camps were crowded, with too many people living in too little space (the WRA planned for 32 people to live in each 2,000 s.f. barracks building).  Think about that in terms of your current home.  Think about it also in terms of what the Camp was originally designed for and how many people actually lived there. The Tule Lake Camp was initially designed to house 15,000, but housed nearly 16,000 people.  Then, it’s capacity was expanded to 16,000, but 18,789 came to live there. Only one other WRA Camp, Manzanar, exceeded its design capacity.  Manzanar was designed for 10,000 and had 10,046 living there at its maximum occupancy.  Most other Camps operated at significantly below capacity, while  Minidoka operated at 93% and Amache operated at 91%.  There was an appalling over crowding at Tule Lake right from the start.  As you will see, that led to major problems.

“We saw all these people behind the fence, looking out, hanging onto the wire, and looking out because they were anxious to know who was coming in. But I will never forget the shocking feeling that human beings were behind this fence like animals [crying]. And we were going to also lose our freedom and walk inside of that gate and find ourselves…cooped up there…when the gates were shut, we knew that we had lost something that was very precious; that we were no longer free.”

Mary Tsukamoto, from The National Museum of American History

I will spend the next several weeks of my journey going back and forth to Tule Lake.  Thanks for joining me. I hope you will find the trip worthwhile.

Grace and peace to you,

← Starting Out Again Slowly
Getting the Lay of the Land →

2 Comments on “Overcrowding at Tule Lake”