Who Went to Manzanar? 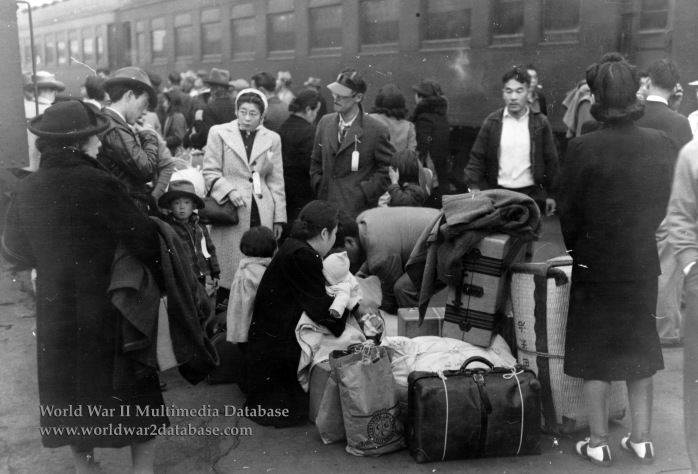 Rather, Who Was Sent to Manzanar?  It was not a voluntary act.  There were wholesale violations of civil liberties in moving thousands of Americans of Japanese ancestry to the WRA Camps. Some people did theoretically “Volunteer” to go to the camps in the early days. In reality, they were coerced by circumstance to go to the camps. There can be no volunteering when there is a climate of mass hysteria, when there are widespread threats of violence and expressions of hatred, when the media are fanning the flames, when most politicians are pandering to the fear mongers and fear mongering themselves,  and when the government orders you to abandon virtually all you own and to prepare to leave for an unknown destination, with only what you can carry.

Who was sent to Manzanar?  Where did they live at the time of being sent? What was their background? What was their citizenship status?  Those are the things I’d like to address briefly in this post.

Americans… of Japanese Ancestry… Were sent to Prison Camps. They were not tried and convicted, even in a Kangaroo court. They had no due process. They were guilty only of being Japanese Americans. Those who were sent to the camps were either first generation (Issei) or second generation (Nisei) Japanese Americans. The Issei were immigrants who had come to America for a better future for their families. The Nisei had been born in the United States.

The Majority lived in Los Angeles at the time they were taken to Manzanar. Others came from cites elsewhere in California and in Washington state.

The Americans who were imprisoned in the WRA Camps came from a wide variety of experience.  They were shop owners, commercial fishermen (who owned their boats), farmers (tenant farmers because they were precluded by federal law from owning farmland), orchardists, nurserymen, landscape gardeners, restaurant owners, chefs, writers, doctors, nurses, dentists, professors, and every form of working person. They were husbands and wives and children in tight knit families.  They were single people. They were prosperous families and families who struggled with fewer resources. They were people who owned their own homes and people who rented apartments. They were people who owned cars and people who depended upon public transportation.

These Americans were accused of being disloyal. Some government officials, including Lt. General John DeWitt, suggested (based upon no evidence or intelligence data whatsoever) that there was a “Fifth Column” of traitors among these Americans who were waiting to collaborate with a Japanese invasion of the West Coast of the United States.  Richard Reeves, in his book “Infamy,” notes that “In fact there was not a single American of Japanese descent, alien or citizen, charged with espionage or sabotage during the war.” (p. xvi in his introduction). Among all of the cruelties of this chapter in American history, the charge of disloyalty was perhaps the most stinging.

“In fact there was not a single American of Japanese descent, alien or citizen, charged with espionage or sabotage during the war.”

Two thirds of these Americans were citizens.  The second generation Nisei were American citizens by birth.  One third of these Americans had been denied citizenship by law.  The first generation Issei, who had immigrated to the United States for a better future, were denied U.S. citizenship by a series of federal government actions and federal laws.  In 1911, the U.S. Bureau of Immigration and Naturalization ordered that declarations of intent to file for citizenship could only be received from whites and people of African descent.  The Immigration Act of 1924 declared that no alien ineligible for citizenship would be admitted into the country. In 1952, Congress passed Public 414, allowing Japanese aliens to become naturalized U.S. citizens.

“The name Manzanar didn’t mean anything to us when we left Boyle Heights. We didn’t know where it was or what it was. We went because the government ordered us to.”

Next Steps on the Journey… In 12 days, I set out for Manzanar, driving in my GMC.

← The First Step…Manzanar
On the Road to Manzanar… →

2 Comments on “Who Went to Manzanar?”