President Franklyn D. Roosevelt signed Executive Order 9066 on February 19, 1942, setting in motion the process that would strip the Constitutional Rights from 120,000 Americans of Japanese ancestry and move them to prison camps.

Signing the executive order was preceded by an intense debate, in public and private, among a cast of characters from the military, state and federal governments, and the major media. Unfortunately, it was predictable that many so-called leaders would support the unconstitutional dislocation of Japanese Americans to what President Roosevelt called concentration camps. They either fostered or caved into a mass hysteria about the supposedly impending invasion of the West Coast of the United State. Looking back, it is surprising that there were some key leaders who opposed the drastic action.

Going to the lowest common denominator of the day, 100% of the Members of the Congressional delegations from California, Oregon, and Washington joined together to pressure FDR to move Japanese Americans into camps. They were egged on and supported by major newspapers in the West, including the Los Angeles Times, the Sacramento Bee, the San Francisco Chronicle, the San Francisco Examiner, and the Seattle Times.

There were six, prominent core supporters of the eventual internment policy. Some of them conspired over a period of days to persuade FDR.

Given that I was not around when Japan attacked the United States at Pearl Harbor, perhaps I have no right to say what I think.  However, leaders are not great because they lead in easy times. They are great because they lead in difficult times, with both courage and wisdom. Of course, it is true that great leaders often emerge after having made some terrible mistakes in the past. Consider the case of Winston Churchill.

In my opinion, the worst leaders in this instance were California Attorney General Earl Warren and New York columnist Walter Lippmann. These two men basically parroted the drivel coming out of the mouth of Lt. General John DeWitt, then commander of the military on the West Coast.  He was a racist.  Beyond that, he made assertions about the possible invasion by Japan and collaboration by Japanese Americans that had utterly no basis in fact or in current military intelligence.  The words and work of Warren and Lippmann, validated and magnified General DeWitt’s distortions, to terrible effect.

The six key supporters are shown below in contemporary photos. 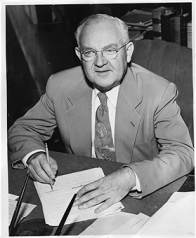 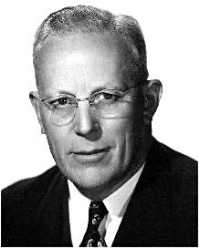 If you want more info about what the supporters were doing, click this link,

There were three surprising, prominent opponents in the Roosevelt Administration to the rounding up and imprisoning Americans of Japanese ancestry. 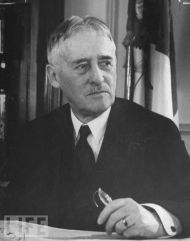 Then, there was Eleanor Roosevelt…

On December 11, 1941, Eleanor Roosevelt wrote the following in her syndicated column, “My Day:”

“This is, perhaps, the greatest test this country has ever met…Our citizens come from all the nations of the world…If we can not meet the challenge of fairness to our citizens of every nationality, of really believing in the Bill of Rights and making it a reality for all loyal American citizens, regardless of race, creed, or color, if we cannot keep in check antisemitism, anti-racial feelings, as well as anti-religious feelings, then we shall have removed the one real hope for the future on which all humanity must now rely.”

Insofar as Americans of Japanese ancestry were concerned…It was not to be.

My main Source for this post: INFAMY: The Shocking Story of the Japanese American Internment in World War II, by Richard Reeves, Picador, Henry Holt and Company, NY, 2015.

Next Steps on the Journey… I’ll be preparing for my trip to Manzanar later this month.