I’m always mindful of the uncertainty created by the U.S. government decision to imprison 110,000 Americans of Japanese ancestry. The image below captures just some of the initial uncertainty as Americans waited for buses that would transport them to some unknown place. 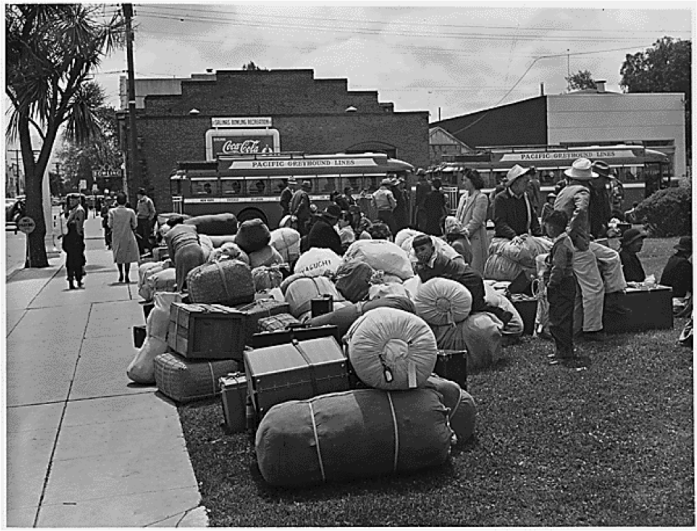 “We had about one week to dispose of what we owned, except what we could pack and carry for our departure by bus…”

Truth be told…I’m getting itchy to go to the camps, and my first visit won’t be for a bit.  My plan was to go to Manzanar in California and Poston and Gila River in Arizona in October. Now, I’ve decided to add a visit the Tule Lake Camp in late April, instead of putting off that visit until the last.

Life is what happens while you’re making other plans. So, here is my New Journey Plan for visiting the ten camps:

The reason for putting Tule Lake in between and at the end is that it is close by, so I can visit frequently, and it was the largest and the worst in some senses. Much more about that later.

In the meantime, I thought it would be helpful to provide some really basic information about the WRA Camps…

Where were the WRA Camps?

Most of the camps were in the Western United States, but you can see that two were all the way out in Arkansas. It is a strange location given that all of the Americans of Japanese ancestry were being excluded from the coastal parts of California, Oregon, and Washington.  I’ve yet to discover why on earth the government decided to locate two camps out by the Mississippi River, but will let you know as soon as I find out.

Generally, the camps were in geographically remote areas, and often in harsh climates. The camps in Arizona were located on Native American lands. The Bureau of Indian Affairs offered the land for use as WRA Camps, over the strong objections of the respective tribes. 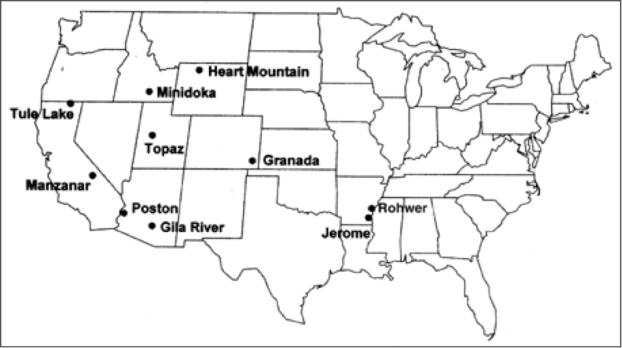 How many people were in each of the camps?

There were about 120,000 Americans of Japanese ancestry held in the camps during the period of 1942 through 1945.  The population varied because: some people were able to move farther east for specific work (often agricultural) that was needed for the war effort (ironic); many young men and women joined the military; a number of people were deported to Japan; thousands were moved to Tule Lake because they openly dissented against the injustice brought against them (and were branded a disloyal in the process); and, a number of people moved from one camp to another for various reasons.

The chart below shows the peak population for each of the ten WRA Camps.

The Densho Encyclopedia is the single most important web-based source on the WRA Camps and the whole “relocation” experience. It can be found at: http://encyclopedia.densho.org/

That’s all for now.  I’ll be doing more research and planning my trip to the Tule Lake WRA Camp site.

Thanks for visiting!  Would love to read your feedback, including any comments or experiences you might have.  I hope that you will join me on the journey.  You can follow my blog by hitting the button at the bottom of the page, and, if you are so moved, you can share my blog with others so they can participate as well.

Grace and peace to you ,

← Why Am I Going to the WWII Internment Camps?
New Travel Plans →

3 Comments on “INTO the UNCERTAINTY…”